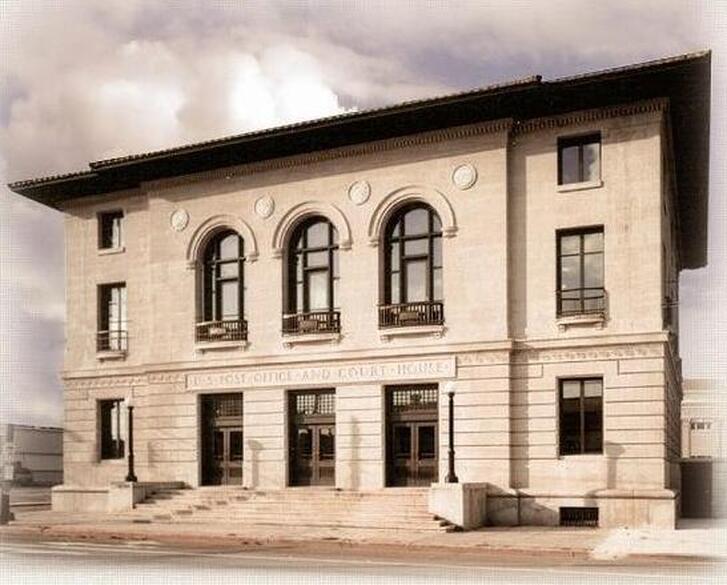 ​The Lundy, Lundy, Soileau & South office building, located at 501 Broad Street, is the original U.S. Post Office and Federal Courthouse and is on the register of National Historic Places. Its restoration was monitored by the U.S. Department of Interior, through the State of Louisiana, Division of Historic Preservation.

The property on which the building was originally constructed was deeded to the United States of America on February 15, 1907 by Lake Charles Lodge No. 165, F. and A.M. (Masons). On October 7, 1938, the Lodge deeded additional property (the current parking lot area) to the United States, taking the boundary of the property to the Lodge’s driveway, just south of the current Lodge. Construction of this limestone structure on a granite base began in 1909.

The building, designed in 1908, is in the style of French architect Paul Phillipe Cret. The first floor has a rusticated facade topped with a string course of stylish fossils, typical of Cret. There are centered Roman arches that terminate in fleur-de-lis, roundels on the facade and three balustrades in front of the pocket arched windows. The tiled roof overhang is adorned with rosettes and supported by carved wooden brackets. Several of the rosettes had deteriorated and had to be replaced. (Dr. Joe Cash found one in pieces in the middle of Broad Street during our initial renovation phase.) A local craftsman hand-carved the replacement rosettes out of cypress. The size of the building is 13,272 square feet, which includes 1,824 square feet of basement area.

U.S. Post Office and Courthouse.
In 1912, the U.S. Post Office and Courthouse took occupancy at 501 Broad Street and remained until a new Post Office/Courthouse complex was built on Moss Street and dedicated in 1958. The building was the center of activity for mainstream Lake Charles from the 1920’s through the 1950’s. The Federal Government transferred the Broad Street building to the Louisiana Board of Education in 1961. In preparation for becoming the home of Sowela Technical Institute, it underwent a significant remodeling. This included the placement of linoleum tile over the wood floors, dropping new ceilings to a uniform height of ten feet throughout, the construction of a colored glass brick and cement facade on the Broad Street entrance, the removal of the original marble stairway from the first to second floor and, most damaging to the original construction, the addition of flooring in the Courtroom off the third floor hallway to create new square footage on the third floor. This new flooring had the effect of horizontally dividing the Courtroom, creating two rooms, each with ten-foot ceilings. The remodeling also included the bricking up of the arches of the Courtroom windows to make them rectangular and similar changes to reduce, and make uniform, the size of all the windows.

The Renovation
Courthouse The building was purchased on August 14, 1996 at a Sheriff’s sale. The purpose was to renovate the building for use as law offices for the firm.

The initial renovation involved the demolition of interior spaces to return the interior to its original shell and the removal of the flooring added to the third floor. This was followed by minimal asbestos removal. (The original construction pre-dated the use of asbestos as insulation.) The exterior was sandblasted and the Broad Street facade and fire escape on the east exterior were removed.

The second construction phase was the cleaning and repair of the tile roof. The roof is supported by iron beams that support cypress, which in turn support the tile roof. Much of the cypress had to be replaced, and each piece of tile was removed, cleaned, repaired or replaced, then reinstalled.

Courthouse
The major renovation phase then began. Custom windows were made to match the original look of the windows. A significant effort involved restoring the original plaster molding found in what was formerly the public area of the Post Office on the first floor, the hallways and offices of the second and third floors and the Courtroom. Much of this had been damaged in the 1950’s remodeling.

Lundy, Lundy, Soileau & South, L.L.P.  The major architectural change was to move the main entrance from Broad Street to off the rear parking lot. A door was added to an original window area, and new steps and a ramp were constructed. An elevator was installed that operates from the first to the third floors.
© COPYRIGHT 2019. ALL RIGHTS RESERVED.
Website design